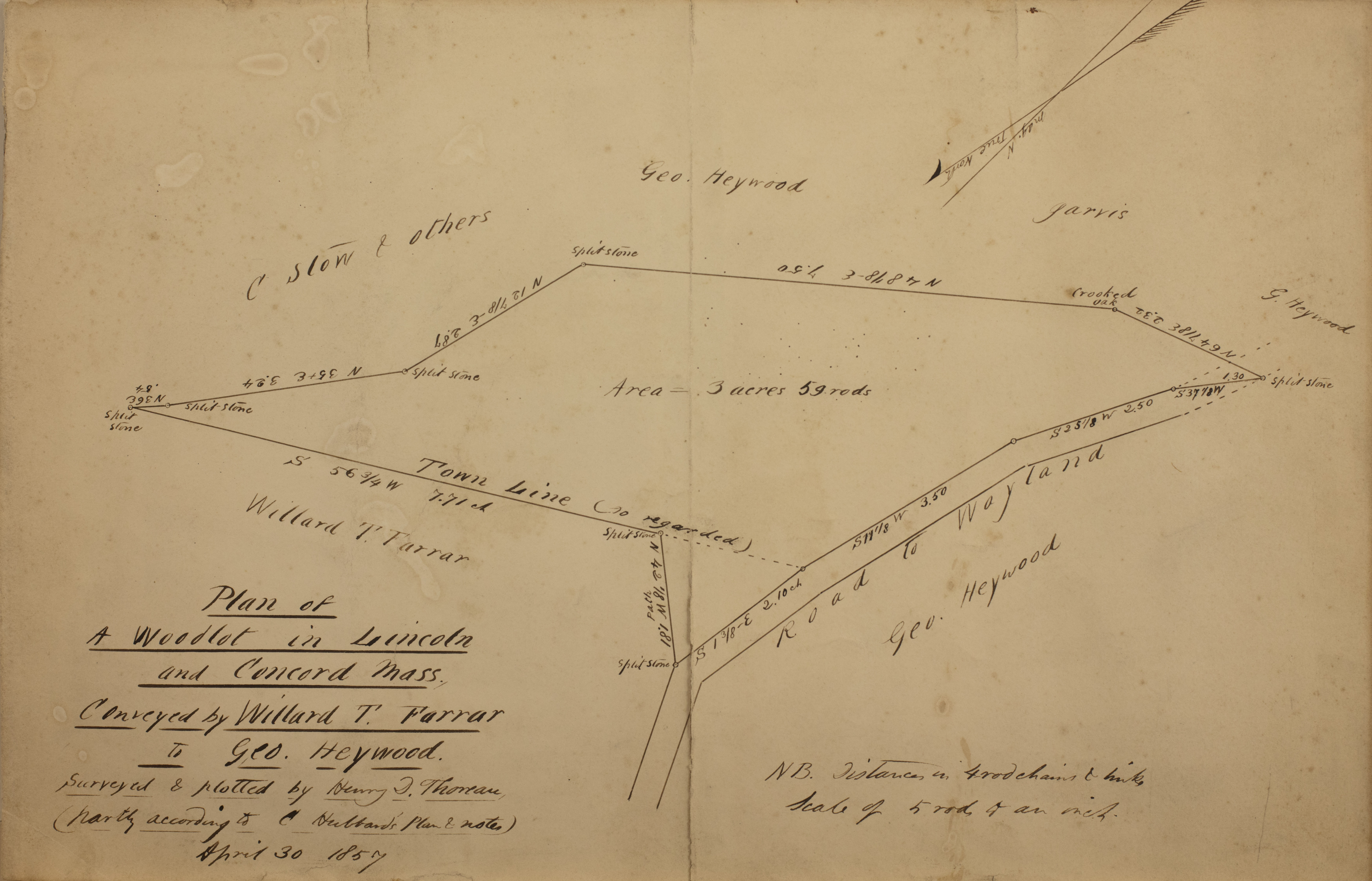 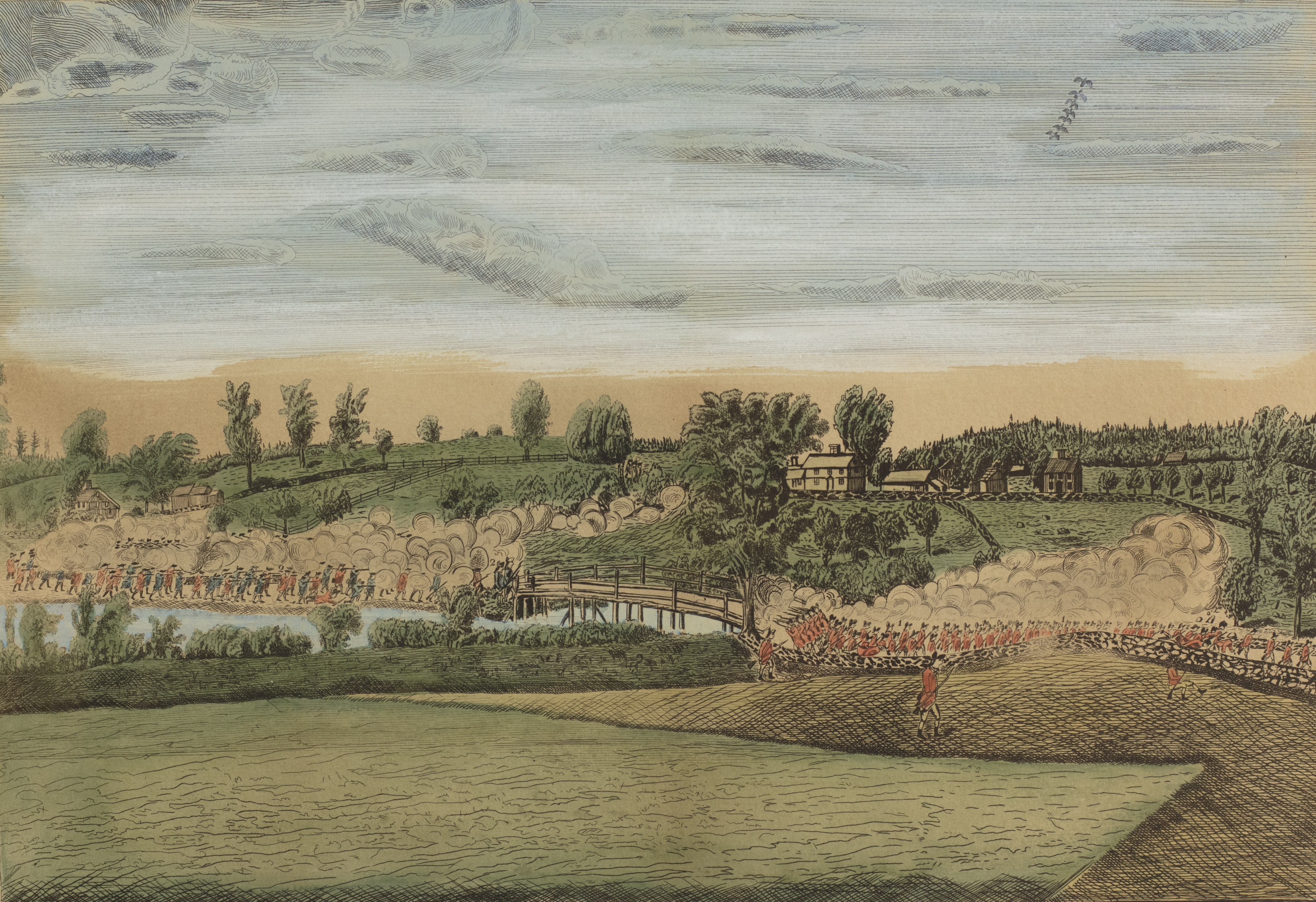 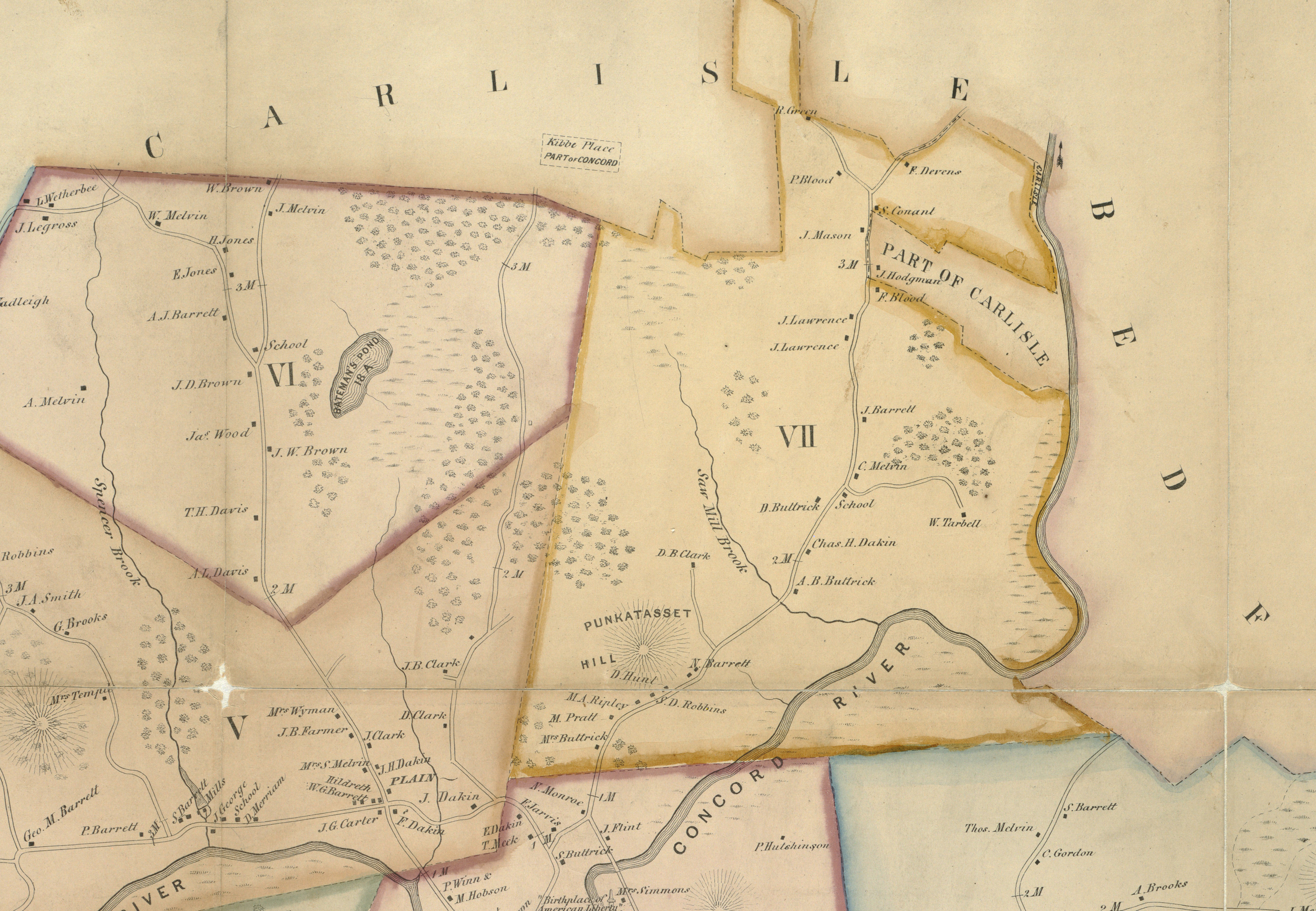 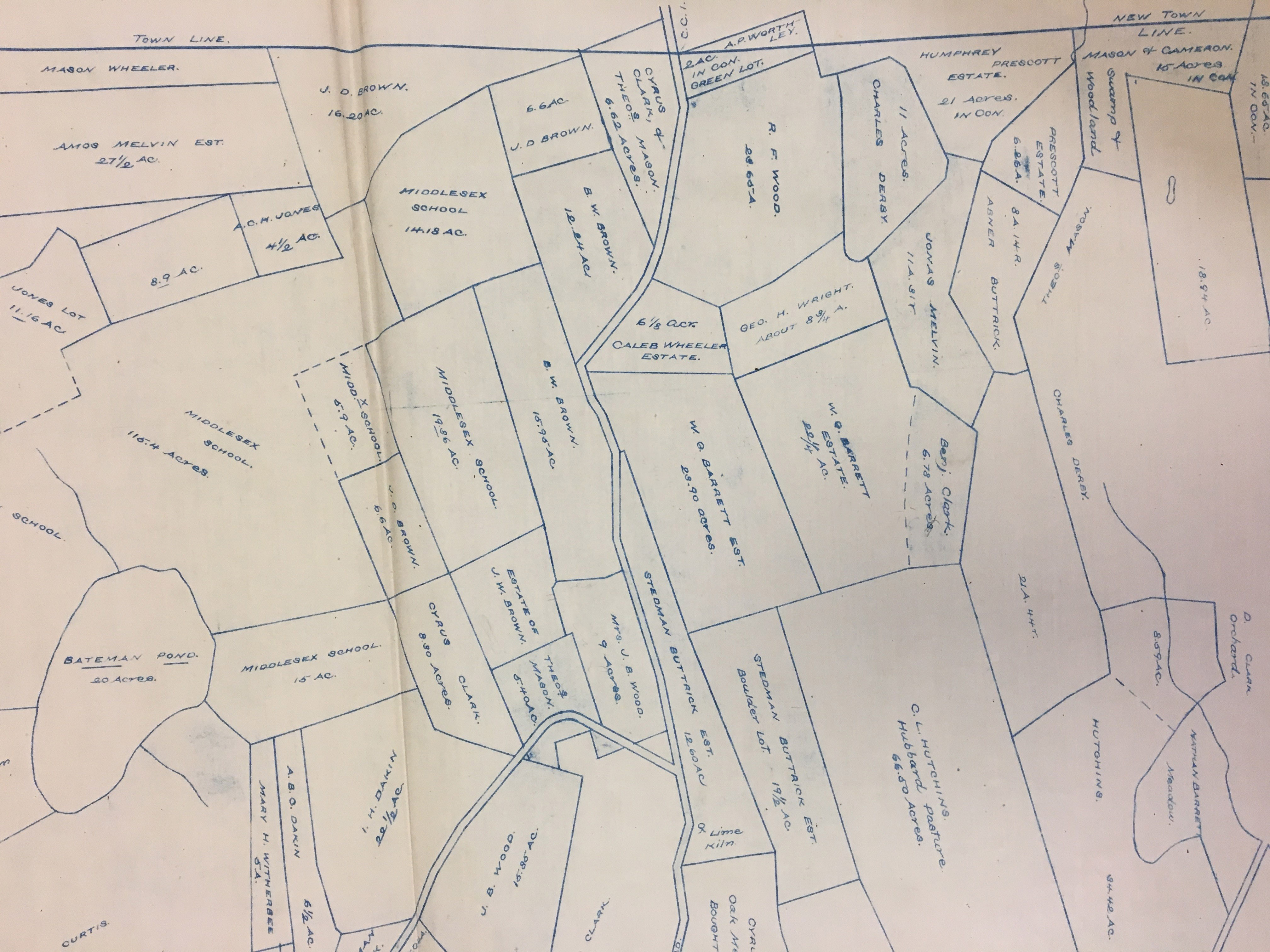 Boaz Brown was probably the first settler in the woods around 1710 and his homestead and the meadow he farmed were located off Hugh Cargill Road.

The cellar hole on Estabrook Trail in the heart of the Woods was almost certainly associated with the brief late 1700s lime-mining operation on the same parcel. There is no history of owership or occupancy by the Estabrook Family.

The Adams homestead was the home of Paul Adams and his wife Rebecca Estabrook, which descended in the Estabrook Family and is located on Middlesex School property.

Located deep in the woods, far from any trail, is the "Yellow Birch Cellar" made by Henry Flint in the mid 1700s but abandoned before completion. (see map)

While Thoreau spent most of his exploring time on the rivers or in the South part of Concord, he did visit Estabrook both in his capacity as a surveyor, and as a visitor on less than ten of his thousands of excursions. There are notable instances in his journals where he discusses the Estabrook Woods.

In June of 1853, Thoreau in his journal refelected on the Estabrook area and proposed the name "Estabrook Country" for it. Since Thoreau's time, the fields and orchards in Estabrook have been reforested, and the name of the place has evolved into "The Estabrook Woods".

In September of 1859, Thoreau sauntered in the Estabrook Country which he describes as for "walkers, for berry pickers, and for no more worldy travellers" and where the old roads "leave towns behind".

In October of 1859, Thoreau proposes the idea of a town forest and suggests Walden and Estabrook as appropriate locations.

These and other mentions of Estabrook by Thoreau have been collected in a set of Estabrook-related journal entries.

Estabrook Woods is located just to the north of the North Bridge, where in 1775 the battle that started the revolution took place.

Minuteman re-enactors from the north use the Estabrook Trail in their annual ceremonial march to the Bridge; the original 1775 March was via nearby Lowell Road.

In the background picture, the farm on the left belonged to Capt. David Brown, who was the owner of what is now known as Mink Pond in the Woods.

In 1875, a detailed description of The Battle at the Bridge was published, which provides a narrative of the actions in Concord on April 19, 1775.

Additional details regarding Estabrook during the Revolution are provided here:

Estabrook Woods at the time of the Revolution

This old road is the current entrance to the Concord Town land at Punkatasset. It passes to the east of Hutchin's Pond and goes north to Carlisle. This was a main road from Billerica to Concord at the time of the Revolution, and the location of the Revolutionary Tavern. At different times it was also known as Bigelow Road and Whitaker's Road, and passed the Whitaker (later Bigelow) Farm near Hutchins pond and the Oliver Barron Farm at the Carlisle Border. This road also provided access to the man-made "Ice Pond" now known as Hutchins Pond. This road was discontinued by the Town in 1908.

A private road which was primarily used as a logging road for two centuries. Made in parts by the owners from 1720 to 1765. Named in 1889, it previously was known as The Lime Kiln Road. It was formally discontinued by the Town in 1932.

During Thoreau's time, the road was one of the most isolated parts of the town, memorialized in the 1845 Poem : "The Lonely Road", by William Ellery Channing; it was also described by Thoreau as a road that was "not accepted by the Town or the traveling world" which "no jockey, no wheelwright in his right mind, drives over."

Historian Steve Ells says: "The Estabrook Woods in the seventeenth century was a web of paths with names as vague as "ye way which goeth into the woods". Roads such as the current "Chamberlin Trail" and Hugh Cargill Road were important roads in the west side of Estabrook, providing access to private lands known as "The Twenty Score" along what is now Lowell Road. There was also a road in the path of the current "Carlisle Trail" which led from Carlisle to Punkatasset.

The largest part of Estabrook Woods is the nature preserve owned by Harvard University. Harvard lands comprise 40% of Estabrook and are comprised mainly of parcels that decended in the Buttrick and Hutchins families, A history of Harvard's acquistion is given in Concord's Long Range Plan of 1987. This property is a private nature preserve and not public land. It does not have a conservation restriction but is protected by commitments made by Harvard.

Middlesex School is a major owner in the Estabrook Woods. While some of their lands are reserved for school purposes, in 1996 the School placed a large parcel of some of the most beautiful land in Estabrook, comprising about 6% of the woods, into permanent conservation, allowing public access on their trails south and east of Bateman's Pond.

In 1971, the Town of Concord acquired an important Estabrook parcel known as Punktatasset, which is the Town's primary public landholding in Estabrook Woods, and is now protected by a Conservation Restriction.

From 1973 to 1995 Town of Carlisle acquired 17 separate parcels at the northern extent of Estabrook Woods, comprising about 11% of the woods, which together are now known as the Davis Corridor . Many people are surprised to learn that Carlisle owns more public land in Estabrook than Concord does.

Of the 82% of Estabrook Woods that are privately owned, 27% is held by residential landowners. A major parcel extending over one mile along the southwest section of the Estabrook Trail was originally owned by the Clark family and decended in the Emerson family. Another major family parcel is the private Pippin Tree Land west of Punkatasset.

The Concord Land Conservation Trust owns the Chamberlin Woods land on Lowell Road, as well as a parcel adjacent to the Town Land at Punkatasset which together represent 6% of the Woods.

There are also a number of large residential parcels with woodlands on Monument Street, Hugh Cargill Rd, and in Carlisle, along with a number of farming parcels.